Akiko Yoshizawa (吉澤 秋子, Yoshizawa Akiko) is a first-year student at Kitauji High School in the main series. She is a member of the concert band and plays the trumpet.

Yoshizawa is a young teenage girl with straight chin-length dark-green hair that she wears in a bobbed hairstyle where there is a piece of her hair tied into a short, upward ponytail tied with an orange scrunchie on the right side of her head. light green eyes, quite thick eyebrows and a short/petite build, who is also the shortest of the minor characters.

She is usually seen with a normal Kitauji High School uniform for first-year students.

In her second year, she changes up her hairstyle, removing the small ponytail and scrunchie in favor of a light pink hair clip shaped like the number 8.

Not much is know about Yoshizawa, but she seems to be very floaty and living at her own pace. 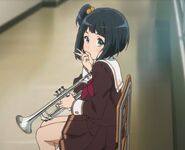