Amika Nase (名瀬 あみか, Nase Amika) is a  character from the spin-off novel. She is a first-year student who plays trombone in the concert band and a friend of Azusa Sasaki. 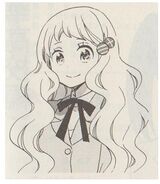 This article is a stub. You can help Hibike! Euphonium Wiki by expanding it.

Retrieved from "https://hibike-euphonium.fandom.com/wiki/Amika_Nase?oldid=25663"
Community content is available under CC-BY-SA unless otherwise noted.