She is a third-year student of Kitauji High School who played a tenor saxophone in the school's band.

Aoi is a teenage girl of below-average height and build with approximately shoulder-length black hair that fades to dark green where it is tied in two braids with bangs clipped back by two light blue barrettes on both sides and light green eyes.

Aoi is a very friendly and disciplined girl who is rarely seen being mad or upset, in which she is calm in most situations where she takes everything nicely and she is also shown to be mature, reliable and understanding as she is seen giving Kumiko Oumae advice, which is why she is also seen as a responsible girl.

Aoi was a childhood friend of Kumiko Oumae and Shuuichi Tsukamoto, who is two years older than them and they lived in the same neighborhood that they often played together, but they grew apart as they got older.

Aoi was first introduced in Hibike! Euphonium Episode 2, where she appears when Kumiko Oumae and Shuuichi Tsukamoto were talking, and thus meeting them after a long time.

Later, in Episode 7, she announces that she will be quitting the band in order to focus on her academic studies, since she is currently struggling with balancing academics and participation in the concert band. She was also partially motivated to quit because of her disappointment in her inability to prevent the schism of the previous year from transpiring.

Although Aoi no longer participates in the performances of the school band during season 2, she is still willing to show her support for the band in events like buying a hard-to-get ticket to listen to their performance at the Nationals. She is also shown to remain on good terms with other band members including Kumiko and Asuka Tanaka.

Kumiko and Aoi are childhood friends that lost contact with each other, but they are later reunited when Kumiko joined the concert band in Kitauji High. They are on good terms, often chatting and hanging out after school despite Aoi being two years older than her. Kumiko can openly talk to Aoi when she needs help, since she knows Aoi is a very kind person and will listen. After Aoi quit the band, they, once again, lost their contact; since the two are rarely seen to interact anymore and Kumiko was sad to find out that Aoi never really regretted leaving the band.

Shuuichi is also Aoi's childhood friend who haven't interacted much, but they seemed to have a close relationship in the past that they later developed a quite friendly relationship after reuniting in high school. 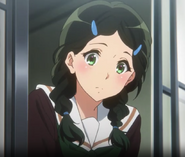