Arlt is an older man who is quite large and tall. He has small gray eyes and a full head of light gray hair tied back in a ponytail. Additionally, he has a bushy mustache and beard. He usually wears a white button-up with a brown apron.

Arlt seems to be a gentle and kind man. He appears to be quite generous as he sends Liz home with a bag of bread each day from work. The two seem to have a good relationship. 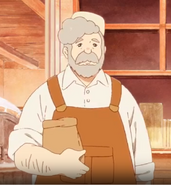 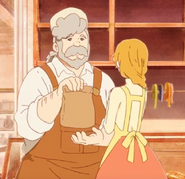