日本語 Azusa Tadokoro
Azusa Sasaki (佐々木 梓, Sasaki Azusa) is a character in the Hibike! Euphonium series and she is also the main character of the Rikka High School spin-off novels, which tell the story from Rikka High School's perspective.

Azusa is a fair-skinned girl with straight mid-length blackish hair that is tied up into a ponytail at the back and bright light-indigo eyes.

Not so much known about Azusa's personality except that she is a very friendly person who cares for her friends and she loves playing instruments, likes music that she is passionate about, but she also knows when to be serious and not where she is quite mature and understanding of situations.

Azusa is first introduced in Welcome! High School, sitting beside Kumiko Oumae as they await the competition results. She then leaves to tell another band member the results, enabling Kumiko's fateful exchange of words with Reina Kousaka. She next appears in Festival Time, where she performs at SunFes with her school, Rikka High School. There, she again meets Kumiko and they talked a little. Azusa asked Kumiko why she chose Kitauji High School, but Kumiko said that she didn't have a reason, but rather that she wanted to have a new start. After that, she went away to perform with her school, while Azusa did the same. She later appeared in Goodbye Competition, briefly waving to Kumiko, and was later shown looking nervous during Kitauji's performance. In the movie-version retelling of the first season, Azusa gets a few images focused on her during the credits, after the competition.

Here you see Kumiko on the left and Azusa on the right while doing the peace sign on both hands.

Here we see Kumiko on the left and Azusa on the right lauging at something they were discussing.

Azusa is seen here struggling with her studies.

Here we see Azusa surprised to see Kumiko at the festival.

Kumiko and Azusa are seen conversing about the festival and their lives so far after parting ways.

Azusa is seen here in the competition of their last year before secondary school. 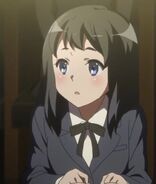 Young Azusa during the competition before secondary school. 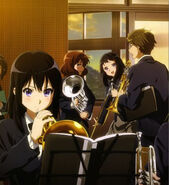 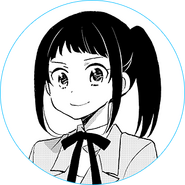