The Bass Drum (バスドラム, Basu Doramu), also called Kick Drum, is an instrument in the percussion family. It is a large drum which produces a loud, deep, sound with an indeterminate pitch. Someone who plays the bass drum is called a bass drummer, or more broadly, a percussionist.

There are two main types of bass drum: The concert bass drum, and the kick drum.

The concert bass drum is the larger of the two, usually mounted on a frame and struck with a mallet. It can be rotated around on this frame to aid the player as necessary. Sometimes the drum is suspended on springs to reduce stress on the frame.

The kick drum is much smaller, placed on the floor as a part of drum sets and serving as the mount for toms. It is played with a pedal. The pedal is a small, simple machine that is pushed down on by the foot. This causes a small mallet to extend and strike the drum.

Additionally, there exist bass drums which are carried in marching bands, called marching bass drums. They are strapped onto the player's front. In size, they are about the same as a kick drum, and function similarly to a concert bass drum.

The bass drum is among the simplest percussion instruments. Bass drum rhythms are usually quite simple and typically either play on the beat or follow the melody. Players are expected to strike the drum with proper technique; Generally, you should strike a few inches away from the rim rather than the center of the drum. This produces the fullest sound on the instrument. To further achieve the desired sound, players need to select the proper density and material of the mallet. Additionally, players need to use both hands to play. One hand strikes with the mallet, while the other presses against the drum to mute or dampen the sound. If rolls are also required, the player has to juggle two mallets, and muting becomes more difficult.

Kick drums typically have more difficult parts. As part of the drum kit, they are most prevalent in popular, rock, and jazz music, and are responsible for a great deal of the rhythm. Players must coordinate themselves to play the different rhythms on each drum. In a standard kit, the right foot controls the kick drum pedal. Inside the kick drum is often a blanket, rags, or other variety of cloth. This is used to dampen the sound, since one's hand cannot be used. Techniques like rolls are impossible on this variant, and thus they can't always serve in place of the concert bass drum.

Bass drums, in one variant or another, are included in every type of ensemble, with the exclusion of small groups like chamber music. Concert bass drums are used in wind ensembles, symphony orchestras, and sometimes marching band front ensembles. Kick drums are used in popular music, rock, jazz, wind ensembles in certain cases, or any other group which uses a drum kit. Marching bass drums, as the name suggests, are used exclusively in marching bands or other dynamic ensembles.

In wind ensembles and symphony orchestras, bass drums often do not have their own labeled part, and instead will play a "Percussion" part which may include other instruments that the bass drummer has to play in addition. As a general rule of percussion instruments, you must be able to play all of them, not a single one; no one is just a bass drummer.

Every percussionist in the Kitauji High School Concert Band is able to play the bass drum. Some examples include: 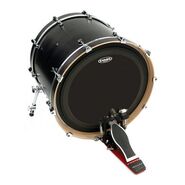 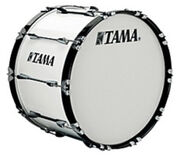 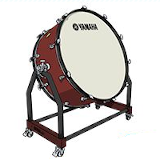