The Bassoon (ファゴット, Fagotto) is an instrument in the woodwind family. A musician who plays the bassoon is called a bassoonist or bassoon player.

A bassoon is mostly made out of wood. It is divided into the bell, the bass (long) joint, the tenor (wing) joint, and the boot joint. In additional, there is a silver crook (bocal) containing the instrument's double reed, usually made out of bamboo, which is the part the player blows into.

The contrabassoon is the lowest-pitched woodwind instrument in common use. Pitched one octave lower than the bassoon, it is a transposing instrument, with music notated an octave higher than sounding. The instrument is known for its distinct reedy, dark tone, as well as its unique paperclip shape.

The contraforte is a modern variant of the contrabassoon. It has an improved dynamic range and a less harsh tone compared to the regular contrabassoon. The most striking physical difference is its upturned bell, in contrast to the normal downwards bell on contrabassoons. It has gained popularity in recent years, with many new bassoonists preferring to play contraforte over contrabassoon like Lewis Lipnick.

The tenoroon is essentially a pocket sized bassoon, and, as its name suggests, is the tenor member of the bassoon family, pitched in F, or very rarely, in G However, it is very rare and therefore not called for often in musical literature.

To make a sound on the bassoon, the player blows into the double reed attached to the instrument's bocal. A bassoon typically requires a lot of breath to make it sound good, the same amount of breath that an oboist needs.

The player will open and close the silver keys, which will change the pitch of the instrument, as on other woodwind instruments. Bassoons, perhaps infamously, are known for requiring a lot of thumb work in regards to pressing keys.

Bassoons are used primarily in concert bands, symphony orchestras, and wind quintets. Like oboes, they are never used in marching bands, for a variety of reasons. Instead, other instruments like saxophones, and historically sarrusophones, fill in their role. Bassoonists will normally become color guard members or double on another instrument during marching season.

The bassoon is known for its distinctive tone color, wide range, variety of character and agility. Listeners often compare its warm, dark, reedy timbre to that of a male baritone voice.

As such, bassoons usually function as a bass role in ensembles. However, many pieces, especially orchestral, feature bassoon solos.

There are two bassoon players in the Kitauji High School Concert Band:

In Rikka High School Marching Band, there is a bassoonist named Momoka Koyama.

Together with the oboes, they form the double reed section.

Historically, the sarrusophone used to fill the role of the bassoon in marching bands. 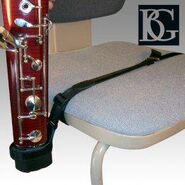 Bassoons often require a "seat strap" in order to be played, as they are quite heavy.