Clarinetists
The Clarinet (クラリネット, Kurarinetto) is a family of woodwind instruments. A person who plays any type of clarinet is called a clarinetist or clarinet player.

The E-flat Clarinet, piccolo clarinet or sopranino clarinet is the highest pitched and smallest member of the clarinet family used in most ensembles. It is pitched in E♭ like the alto and baritone saxophones, thus being a perfect fourth higher than the B♭ soprano clarinet.

The A clarinet is a member of the clarinet family pitched in the key of A, commonly used in orchestras. Most professional clarinetists will have at least one B♭ clarinet and one A clarinet, as they are used almost equally as often as the former in orchestral music. However, they are almost never used in concert band or other band music, in favor of the B♭ variety.

Despite looking a lot like the alto clarinet, this instrument is pitched in F (or less often in G), a fourth below the B♭ clarinet. The basset horn is fairly rare; it only appears occasionally in orchestral music. and almost never makes an appearance in bands. It was said to be Mozart's favorite woodwind instrument. He scored for it in pieces like the Grand Partita and the Requiem.

The alto clarinet or less frequently the tenor clarinet is a member of the clarinet family pitched in E♭, an octave below the E♭ soprano clarinet. It covers the range between the soprano and bass clarinet. This instrument is most commonly seen in concert bands, however not every ensemble has an alto clarinetist, such as the Kitauji High School Concert Band.

The contra-alto clarinet and contrabass clarinet, collectively known as the contra clarinets are the two lowest members of the clarinet family. The contra-alto is pitched in E♭, one octave below the alto clarinet, and the contrabass is pitched in B♭, one octave below the bass clarinet. These clarinets are not especially common in any type of music, but they are most prevalent in concert bands. Some higher-level pieces call for the instruments, and they are seldom used in high school concert bands.

Clarinets produce sound with a reed—a thin and fragile sliver of cane, or, in modern times, plastic. The reed vibrates against the mouthpiece as the player blows into it, producing the distinct tone of the instrument. Different strengths or hardness of reed can be used to provide different tones, however, the harder the reed, the more air it needs to play.

In a concert band setting, the principal clarinetist is typically responsible for providing a tuning pitch for the band (normally the role of the oboe in a symphony orchestra). The three most common tuning pitches clarinetists may provide are a concert B♭ (as given by Hirone Torizuka), an A, and/or and F.

In many concert bands, the principal clarinetist is the equivalent of the concertmaster or concertmistress in a symphony orchestra. They are the second most significant person in the band after the conductor, and are typically ranked highest out of all the section principals in terms of the group pecking order. Some bands recognize the principal clarinetist with a separate stage entrance, during which they bow to the audience and tune the band before the conductor's entrance.

A typical B♭ clarinet section in a concert band can range from as few as 6 clarinets to as many as 30, and bass clarinets usually number between 1 and 4. The B♭ clarinets are divided into three parts—firsts, seconds, and thirds—in a pyramid ranking with more thirds than seconds, and more seconds than firsts.

Since the middle of the 19th century, the bass clarinet has become an essential addition to the orchestra and wind band.

E♭ clarinets of both the sopranino and alto variety tend to only have one or at max two of each in a section, and oftentimes neither or one is missing, particularly the E♭ sopranino clarinet since not every piece has a part for it. It is not uncommon for an E♭ clarinetist to switch to or from a B♭ clarinet if one of the pieces does not call for E♭ clarinet. 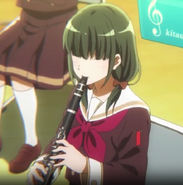 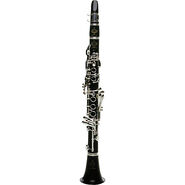 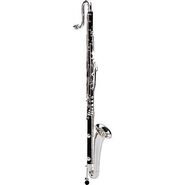