The contrabassoon is the lowest-pitched woodwind instrument in common use. It is pitched one octave lower than the bassoon. It is a transposing instrument, with music notated an octave higher than sounding. The instrument is known for its distinct reedy, dark tone, as well as its unique paperclip shape.

Contrabassoons are exceedingly rare in concert bands, usually only used if a piece specifically calls for one. A regular bassoonist will double the instrument in the piece during a performance. Like oboes and bassoons, contrabassoons are never used in marching bands, for a variety of reasons. The instrument is a regular member of orchestras though, and can most commonly be found here.

Bassoonists will typically have a few years' experience before picking up the contrabassoon. It is generally not someone's first instrument, especially due to how expensive the instrument is.

A new first-year member Suruga Koteyama is the only contrabassoonist in the Kitauji High School Concert Band. She appears in Sound! Euphonium: The Movie - Our Promise: A Brand New Day film. 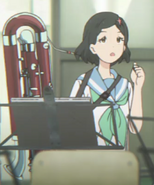 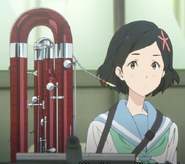