Crescent Moon Dance (三日月の舞, Mikadzuki no Mai) is a piece for wind ensemble composed by Namie Horikawa (a fictional composer). In reality it was composed by Akito Matsuda, who wrote the rest of the Sound! Euphonium soundtrack. It is Kitauji’s free choice piece for the competition of the main series.

The piece features a prominent and difficult trumpet solo in the lyrical section, which Reina Kousaka auditions for and performs. It also features an oboe solo, performed by Mizore Yoroizuka. Asuka Tanaka also remarks that the piece offers many challenging and interesting parts for bass instruments. This is because the first part of the piece, as described in the novels, contains a challenging melody for the trumpet section that is then passed to the bass section in the second part, which makes it difficult to play.

The novels described the piece as the number one most difficult piece on the list of pre-approved pieces released by the All-Japan Band Association judges. This is significant, as Noboru Taki chooses the piece for Kitauji anyway, hoping to impress the judges by playing something the other bands were unlikely to choose.

The full conductor's score (without individual parts) for Crescent Moon Dance was released exclusively in Japan as a part of DVD sales. It is currently rather difficult to obtain from overseas.

As of 2016, the sheet music has been released for purchase by Japanese wind ensembles and is gaining recognition as a legitimate piece of wind repertoire in the country. 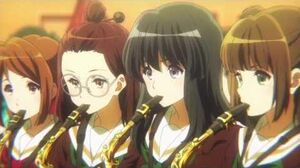