A Cymbal (シンバル, Shinbaru) is an instrument in the percussion family. A musician who plays cymbals is called a cymbalist or simply a cymbal player.

Cymbals are round, usually brass plates, with a small dome in the center. This dome has a hole drilled through it to allow the cymbal to either be mounted or have handles attached. The cymbal can usually be divided into 4 main sections: The bell (the previously mentioned dome), the bow, which can be further divided into the ride area (closest to the bell) and the crash area (further from the bell), and finally the rim or edge, the circumference of the cymbal.

Cymbals come in a variety of sizes, with larger ones being louder and sustaining longer. Cymbals are also measured by their weight, determined by the thickness of the plate. Heavier cymbals have louder volume, more cut, and better stick articulation, while thinner ones have a fuller sound, lower pitch, and faster response. Their sound is also determined by their profile, the vertical distance between the bottom of the bell to the edge of the bow. Higher profile cymbals are more bowl-shaped and have a higher pitched.

The orchestral crash cymbal is perhaps the most famous variety. They can also be called clash cymbals, since "crash" is also the name of the standalone cymbal used in drum set. Traditionally, they are used in pairs, and are played by quickly pressing together or crashing the two together (hence the name). They are held by a strap that runs through the hole in the bell. Aside from just crashing, crash cymbals can also be played by rubbing their edges together, tapping the edge of one against the body of the other, scraping the edge of one from the inside of the bell to the edge, or shutting them together and choking the sound by pressing the instruments against the player's body.

A suspended cymbal is any type of cymbal which is played with a beater such as a stick or a mallet, rather than with another cymbal. This includes, but it not limited to the following:

The crash cymbal is a suspended cymbal with a loud, sharp "crash" which is used for occasional accents in music. It is mostly used as a part of drum sets. Typically, it is positioned to the left of the player, and there are usually 1-2 crash cymbals in a set.

The hi-hat, sometimes also called a hihat or highhat is a combination of two equally sized cymbals parallel with the ground, facing each other, mounted on a stand. They can be pressed together by stepping on a pedal connected to the instrument. They are also played with sticks. It is usually furthest to the left on a drum set from the player's perspective.

The ride cymbal is a standard member of the drum set. It is quite large, and it provides a steady rhythm compared to the crash cymbal which is used for accents. It is placed on the far right of the set, above the floor tom. It is played with a drum stick and has a dark, rich tone.

The splash cymbal is essentially a small crash cymbal, used to add accents and effects to music. It is usually no larger than 13" in diameter, with the normal size being 10".

The China cymbal is a type of crash cymbal used to create bright, explosive effects. They are often called trash cymbals because of the sound they produce. They are named after their resemblance to Chinese gongs.

Cymbal performance is highly dependent on the variety of cymbal. Some techniques that are fairly standard include rolls or tremolo, which are usually accompanied by a crescendo to great a grand, dramatic effect. Concert cymbalists also need to take care in selecting proper mallets, which can differ between soft yarn mallets or drum sticks depending on the desired effect. Cymbals can also be played in quite unusual ways, such as Claude Debussy's La Mer, where the player is instructed to rub a coin across the edge of the cymbal.

Cymbals are used across nearly every genre of music in one variety or another. They are used in pop, rock, jazz, and modern music in drum sets, especially hi-hat and crash cymbals, as well as concert bands, symphony orchestras, and marching bands.

As part of a drumset, cymbals are usually notated at the top of or above the staff. As a standalone instrument, they are often written as part of a larger Percussion 1, 2, 3, etc. part, typically in joint with one or more other cymbals. Composers notate through text which cymbal to play at what part in the piece.

In concert bands, marching bands, and orchestras, cymbals tend to play along with the bass drum since they mostly fill the same purpose. When combined, they add a loud accent effect to the music. 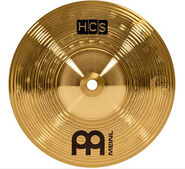 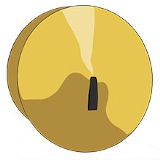