Vivace!
Hesitation Flute (とまどいフルート, Tomadoi Furūto) is the second episode of the second season of the Hibike! Euphonium anime series. It was broadcasted on October 12, 2016.

The band members take a break before embarking on a training camp. Kumiko and her friends go to the pool, but wind up running into various senpai from the club, including Nozomi, who opens up to Kumiko about her experiences last year and why she feels like she needs Asuka's permission to rejoin the band. Kumiko offers to ask Asuka why she won't let Nozomi rejoin. Once the training camp begins, Taki reveals that aside from Hashimoto he has asked another former classmate, Niiyama, to tutor the woodwinds. Students wonder if Niiyama is Taki's girlfriend, disheartening Reina. That night Kumiko has encounters with Natsuki, who explains why she wants to help Nozomi, and with Mizore, who says that she hates competitions. 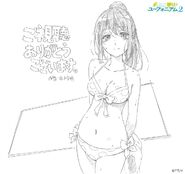