Tutti!
Straight Trumpet (まっすぐトランペット, Massugu Toranpetto) is the tenth episode of the first season of the Hibike! Euphonium anime series. It was broadcasted on Tuesday, June 9, 2015.

Despite not making the cut, Natsuki remains in surprisingly good spirits and expresses her wish to play again next year, much to Kumiko's relief. Upon discovering that Mr. Taki had known Reina prior to their meeting at Kitauji, Yuuko Yoshikawa, a second-year trumpet player who idolizes Kaori, publicly accuses him of playing favorites in the auditions. Reina angrily rebukes her, defending Taki's honor and saying that she was chosen for the simple reason that she is the superior musician, which enrages Yuuko. Natsuki and Kaori are ultimately forced to separate the two.

Later, Reina confides to Kumiko that she chose Kitauji over other schools because of Mr. Taki and that she loves him, much to Kumiko's surprise. As the rumor that Mr. Taki held the auditions as a pretense to give Reina the solo begins to spread, the collective mood of the band begins to drop. In response, Mr. Taki announces that he will hold a second round of auditions for anyone who is interested in appealing the results of the first audition, with performances being judged by a vote from the band members. Kaori asks to redo the audition for the solo part, meaning Reina will have to redo her audition as well. 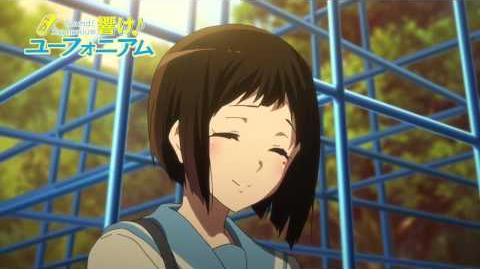