Welcome Back, Audition (おかえりオーディション, Okaeri Ōdishon) is the eleventh episode of Hibike! Euphonium Season 1. It was first broadcasted on June 16, 2015

After hearing Reina practice for the audition, Yuuko is shocked at her playing ability, privately conceding to Kumiko that Reina is fit to play the solo. Meanwhile, Kaori attempts to gauge Asuka's opinion regarding her playing. Though Asuka remains evasive in her answers, Kaori decides that she would rather not know instead. The next day, Yuuko confronts Reina and begs her to throw the audition for Kaori's sake, who, as a senior, will not have the chance to play again. Reina, defiant as ever, declares that Kaori's circumstances have nothing to do with her and leaves. Before the audition, Haruka goes to see Kaori when Asuka refuses to; likewise, Kumiko visits Reina, who questions whether or not she should give Kaori the solo, and reminds the latter that in order to become something special, she must win. At the audition, Kaori plays first, but as Reina finishes her performance, it is clear to the band that Reina is the better soloist. However, when asked to decide by Mr. Taki, nearly everyone abstains from voting; Yuuko and Haruka vote for Kaori, while Kumiko and Hazuki vote for Reina. Faced with a tie, Mr. Taki asks Kaori if she is willing to play the solo, but, having heard Reina's performance, Kaori declines.

Here is why Reina won the reaudition[1] 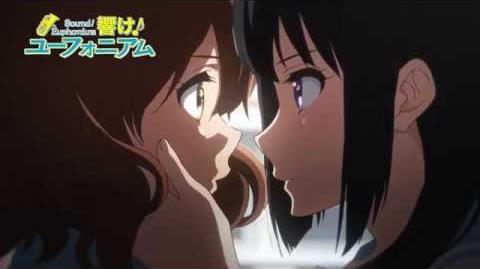