My Euphonium (わたしのユーフォニアム, Watashi no Yūfoniamu) is the twelfth episode of Hibike! Euphonium anime series. It was first broadcasted on June 23, 2015

Mr. Taki asks the euphoniums to play an additional section. While Asuka is quick to learn the part, Kumiko finds herself struggling to master the piece despite relentless practice. During an ensemble, Mr. Taki asks whether or not she will be ready by the competition; Kumiko confidently declares to him that she will. Encouraged by Reina and other members of the bass section, Kumiko continues to practice the part. However, during a critique of the band's performance, Mr. Taki suddenly asks Asuka to play the part solo, leaving Kumiko shocked and depressed. Attempting to cheer her up, Hazuki and Midori invite Kumiko out to eat, but neglect to notice that she has forgotten her phone. On the way home, Kumiko breaks down crying, but finally realizes why Reina had been so upset when they failed to advance at the concert band competition in junior high. Returning to school to retrieve her phone, Kumiko runs into Mr. Taki, who reminds her of her promise to be ready by the competition and encourages her to continue practicing. Realizing that she still has a chance to perform, Kumiko meets up with Reina to share the good news with her. 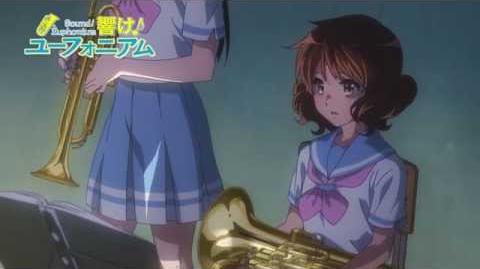