DREAM SOLISTER (Wind Orchestra Ver.) OST Track 17
Goodbye Competition (さよならコンクール, Sayonara Konkūru) is the thirteenth and the final episode of the first season of the Sound! Euphonium anime series. The first broadcast of this episode was on Wednesday, July 1, 2015.

As the day of the competition arrives, the band members all engage in preparations for the upcoming event. Natsuki and Hazuki, along with the other non-performing band members, present to everyone their own personalized good luck charms; Haruka expresses her gratitude for the gesture before offering the band her own words of encouragement. Midori, sensing Kumiko's nervousness over her fear of failure, reassures her. At the concert hall, Mr. Taki reminds the band members that it was they who set the goal of making it to nationals before encouraging them to put on a spectacular performance. Shuichi, despite lingering tensions with Kumiko, attempts to reconcile with her; Kumiko responds with a fist bump. During the performance, Kumiko reminisces back on her junior high days and admits that despite having wished to go to nationals before, she never thought it a serious goal until now. When the results are announced, Kitauji is revealed to have successfully advanced to the Kansai regional competition, with the band celebrating their victory while an overjoyed Reina tearfully hugs Kumiko. 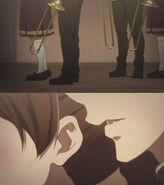 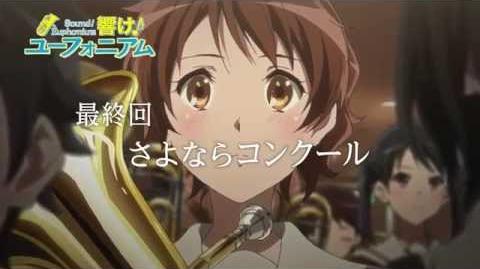