Ai wo Mitsuketa Basho (Trumpet and Euphonium Duet)
Festival Triangle (おまつりトライアングル, Omatsuri Toraianguru) is the eighth episode of the Hibike! Euphonium anime series. It was broadcasted on Tuesday, May 26, 2015.

Kumiko vehemently denies being romantically involved with Shuichi, much to the relief of both Hazuki and Midori. On their way home from school, Shuichi asks a shocked Kumiko to go to the Agata Festival with him, to which she does not reply. During practice, Kumiko's attempts to ignore Shuichi fail when he misinterprets her actions as a signal to speak privately; Kumiko's attempt to deflect his invitation inadvertently causes her to ask Reina to go with her instead. With Kumiko's encouragement, Hazuki asks Shuichi to go with her. At the festival, Hazuki confesses her feelings but is rejected. Meanwhile, Reina invites Kumiko to hike with her to several shrines overlooking the city, avoiding the festival altogether. Reina divulges her interest in spending more time with Kumiko, stating that she finds Kumiko's true personality—nothing like the "nice girl" she presents herself as—attractive. Reina reveals that she has no interest in fitting in, but rather wants to be something special, which is why she plays the trumpet. The day ends with the two of them playing a piece from their middle school concert band repertoire atop the mountain, leading into the day of the auditions. 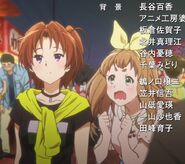 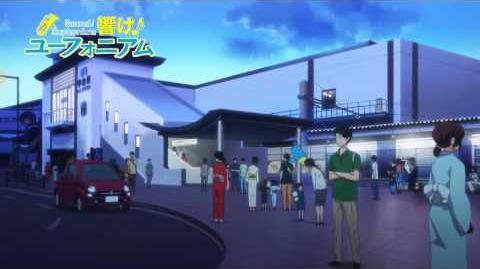