Episode 2
Hiro Kahashi (加橋 比呂, Kahashi Hiro) is a minor character in the Hibike! Euphonium series. She is a third-year student at Kitauji High School who plays the horn in F.

Hiro has long, brown hair that is adorned by red or black ribbon on top, light brown eyes and she is recognizable by her tiny eyebrows.

Hiro was very opposed to Noboru Taki's methodology early in the series and she was often seen angry towards him. Prior to his arrival, she was a very carefree girl where she was shown to be a dedicated and talented member of the ensemble later on.

Hiro seems to be good friends with Juri as they both play the Horn in F and they are frequently seen together.

Hiro and other horn players at the festival. 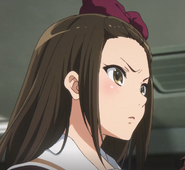