The Horn in F (ホルン, Horun) is a brass instrument. A musician who plays the horn is called a horn player (or less frequently, a hornist).

The instrument is made up of approximately 4 meters of tubing wrapped into a coil with a flared bell. The main tubing on an F horn is about 12–13 ft (3.7–4.0 m) long and that associated with the valves adds additional length to achieve up to about 17 ft (5.2 m) of tubing overall.

Pitch is controlled through the adjustment of lip tension in the mouthpiece and the operation of valves by the left hand, which route the air into extra tubing.

The player's right hand will rest in the bell of the instrument. This technique probably has to do something with the earlier valveless horns, whose pitch could be flattened by manipulating the right hand inside the bell.

The double horn in F/B♭ is the horn most used by professional bands and orchestras.

There are five students that play horn in Kitauji High School Concert Band including:

In addition, Noboru Taki played the horn in elementary and middle school before switching to the trombone.

Chihiro Taki, a wife of Noboru Taki, was also a horn player, and majored in horn in college.

Shuuichi Tsukamoto also played horn prior to high school, where he switched to trombone. 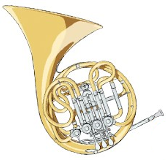