日本語 Manami Numakura
Mamiko Oumae (黄前 麻美子, Ōmae Mamiko) is a side character of the Sound! Euphonium series. She is the daughter of Kentarou Oumae and Akiko Oumae and the older sister of Kumiko Oumae who is one of the reasons behind Kumiko's interest in playing brass instruments.

Compared to Kumiko Oumae, Mamiko sports lighter-brown hair; they both have wavy hair with bangs swept to the left side, though Mamiko's is less wavy and is longer where it is shoulder-length. She has brown-reddish eyes, which she inherited from her father.

She is usually seen with makeup, and is often dressed in a baggy sweater-like top and a brown skirt.

Mamiko barges in Kumiko Oumae's room on occasion to check up on the latter, much to the younger sister's chagrin.

At a young age, Mamiko has been an experienced trombone player, and she was the one responsible for both Kumiko Oumae and Shuuichi Tsukamoto's interest in playing brass instruments.

At the beginning of the anime, Mamiko finds out that Kumiko Oumae has not only changed her hairstyle into a ponytail, but also that she's considering giving up on playing brass instruments for good. She visits her younger sister to hear about her sentiments on the issue, but is quickly shooed away when she catches Kumiko talking to her cactus plant alone.

In Season 2 Episode 8, she runs into a quarrel with her parents, which is later revealed to be due to her wanting to pursue her goal to attend a beauty school against her parents wishes. 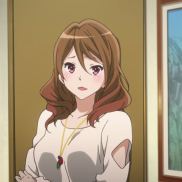 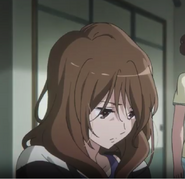 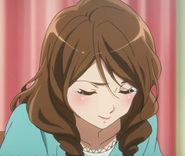 Nostalgia of a time past. Mamiko plays for Kumiko riverside.