Masahiro Hashimoto (橋本 真博, Hashimoto Masahiro) is the new percussion instructor for the Kitauji High School Concert Band who is hired by Noboru Taki (Masahiro's then college classmate) to help with the band on their path to the national band competition, an alumnus of Kitauji High School and a former student of Tooru Taki.

Hashimoto has messy brown hair, green eyes, and light stubble. He dresses in clothing described as "gaudy" and "flashy," and is a head shorter than Taki. He is always seen wearing large blue glasses, a faux-leather and gold watch, thin metal bracelets, and a yellow cord necklace.

Hashimoto has also been seen wearing hot pink shirts, bright yellow shirts, red shirts with strange patterns, and various Hawaiian shirts. In college, he wore a letterman jacket and had longer hair than in the present.

Hashimoto is much shorter than Noboru Taki and he is sturdy-built. He has short blond hair and light blue eyes. In the fall and winter, Hashimoto wears shirts with blazers and pants. In the summer, and sometimes in the fall, he wears athletic polo shirts, sports pants that are rolled up mid-calf length, and tennis shoes.

Hashimoto is a fun-loving, athletic, and humorous man who is consequently highly popular with his percussion students. Like Kumiko Oumae, Hashimoto sometimes accidentally blurts out things. He is somewhat odd, often saying "Hrm?" and even asking his students to call him "Hashimo-chan". He has also repeatedly offered to share details with students concerning Noboru Taki's wayward misbehavior in college, to Taki's annoyance.

Despite his quirkiness, however, Hashimoto is just as strict and demanding with his percussion students as both Taki and Satomi Niiyama. In the light novels, Hashimoto shocks his students on his first sectional with the high expectations he sets for them, similar to the first impression that Taki left the concert band on his first day.

Hashimoto proves to be keenly observant and quickly picks up on the social and emotional dynamics of the ensemble and of individual students, which Taki is often blinded to. In addition, Hashimoto seems caring for all the students in the concert band beyond his own percussion students.

In the first episode, Hashimoto introduces himself to the Kitauji Concert Band as "Hashimo-chan". He offers to spill secrets about Noboru Taki's college life, and begins rambling until Taki cuts him short by stomping on his foot.

In the second episode, Hashimoto purposely sneezes right as Taki is reminding his students not to get sick.

In the third episode, Hashimoto calls Mizore Yoroizuka's playing "robotic" and attempts to motivate her to play with more passion by delivering a monologue in front of the band. He states that the only thing limiting the band from reaching their full potential is their need for expressive playing. Later in the evening, Hashimoto has a personal conversation with Kumiko Oumae. Afterward, it is revealed that he went and apologized to Taki for oversharing in his conversation with Kumiko.

In the fourth episode, Hashimoto reminds the band not to worry just because their performance number is right after a highly competitive school.

After the award ceremony at nationals, Hashimoto congratulates Taki on a great performance, then makes Taki pay for ramen for the two of them. Then they yell at each other about which kind of ramen broth tastes better.

Niiyama and Hashimoto are currently colleagues and were good friends in college. Along with Taki and his girlfriend at the time, who later became his wife, the four of them were a tightly knit clique. In college, Niiyama was a grade younger than Taki and Hashimoto, so they always saw her as a little sister of sorts.

Taki and Hashimoto were in the same year of college. They were best friends and constantly got into mischief together, though Hashimoto later conceded that Taki was always the more attractive among the pair and was the "girl-magnet" in their collegiate concert band.

Taki and Hashimoto share a playful dynamic. When together, they constantly exchange lighthearted jokes and sarcastic banter. Hashimoto's loud, brash humor often complements Taki's subtler deadpan remarks. The fact that Hashimoto's mere presence draws forth a brighter side of Taki's personality does not go unnoticed by the students in the Kitauji Concert Band. Kumiko remarks in the light novel that she had never seen Taki in such high spirits before Hashimoto's debut.

Prior to the events of Hibike! Euphonium, Taki distanced himself from all his friends and family, including Hashimoto, after the death of Chihiro Taki. Hashimoto was hurt and worried, and felt helpless as Taki drowned himself in grief. The two did not regain contact for years until Taki asked Hashimoto to help direct the band at Kitauji. Hashimoto says in the light novels that he was so relieved and happy that Taki had reconnected himself with his friends and his love of music that he almost cried, finally seeing his best friend smile again after years of sadness.

During a Hibike! Euphonium seiyuu event, it was revealed that Hashimoto and Taki had a ridiculous shouting match over which kind of ramen broth was better. It was described by Kumiko Oumae as "a childish argument".

Although Kumiko is not a percussionist and thus not strictly speaking one of Hashimoto's students, Hashimoto is still friendly to her and cares for both her and Reina. Concerned about Reina's evident feelings for Taki, Hashimoto approaches Kumiko to make sure that Reina isn't overstepping any boundaries. In the subsequent conversation, Hashimoto accidentally reveals to Kumiko that Taki is single, widowed, and still grieving. 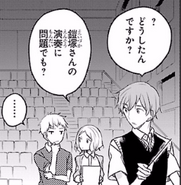 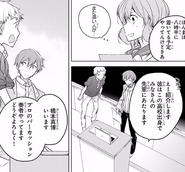 Masahiro hashimoto in the anime

Hashimoto growing teary-eyed as he speaks to Kumiko
Community content is available under CC-BY-SA unless otherwise noted.
Advertisement