Aya Hisakawa
Michie Matsumoto (松本 美知恵, Matsumoto Michie) is a supporting character in the Sound! Euphonium series. She is the teacher of Kumiko Oumae, Sapphire Kawashima and Hazuki Katou who serves as the assistant band director of the Kitauji Concert Band.

Michie is a tall woman in her forties (although she could be mistaken for younger, despite having age marks), with cropped, soft black hair and sharp, violet eyes. She dresses professionally; wearing a white dress shirt - a purple blouse underlying it- white heels, and light gray, capri-cut slacks.

Regarded as the school's severest and sternest teacher, Michie has shown to be quite strict with her class, especially the girls; in the first episode demanding that two female students who shortened their skirts pull them back down to their original length.

Michie knew Noboru Taki's father as well as Reina Kousaka's father that she taught alongside then while they were band directors at Kitauji.

Although they are wildly different people, Michie and Taki appear to be good friends, frequently spending time together outside of school and band rehearsals. The two of them attended the Agata Festival together where Michie also sometimes gives Taki helpful advice. 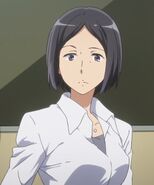