Mikino is a considerably tall girl with curly black hair that is held up in a ponytail by a green bow on the left side and purplish-blue eyes.

Mikino is shown to be an outgoing and even-tempered girl who is very friendly to Raina Kitamura that she seems to have a good relationship with her, who is also a bassoonist. 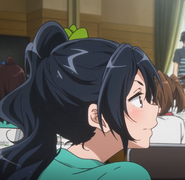