Vivace!
Miraculous Harmony (きせきのハーモニー, Kiseki no Hāmonī) is the fifth episode of the second season of the Hibike! Euphonium anime series. It was broadcasted on November 3, 2016.

Kitauji prepares for the Kansai regionals, with Nozomi having rejoined the band. While there, they hear that Rikka has failed to progress, winning silver. The band members psych themselves up while waiting in the wings; Asuka makes a speech about wanting Kitauji's music to sound out through the whole country at nationals, Mizore promises to play for Nozomi, and Reina promises to play for Kumiko. After their performance, Kitauji wins gold and is chosen to advance to nationals. Kumiko asks Mizore if she still hates competitions, to which Mizore replies that she likes them as of now. 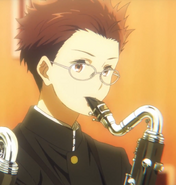 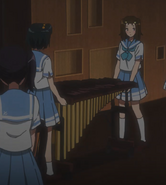