Mirei is a tall fair-skinned teenage girl with short black hair where the front of her hair parted at the left and blue eyes.

Mirei takes everything she does very seriously. This is shown when she asked questions to Kumiko Oumae (Mirei's senpai) and proceeded to write everything down in her notebook. Despite that, she doesn't practice as much as the other members, despite being as talented as her third year senpais. This is possibly due to the fact that she prefers to stay alone as much as she can. At first, she used to be very anti-social, as she would get very angry when called "Micchan" instead of Mirei. She also seemed to be very afraid of human contacts, which is shown when Hazuki Katou tried to fix her hat during the Sunrise Festival and she instinctively slapped her hand away. Underneath, however, she's a very emotive person who doesn't know how to be accepted by other peoples, especially when she realizes she's gone too far. She eventually manages to get closer to the other members of the band thanks to Kumiko's advice.

When Mirei was friends with her fellow tuba player Satsuki Suzuki in elementary school, they were called "Sacchan and Micchan", although she dislikes that nickname.[2] 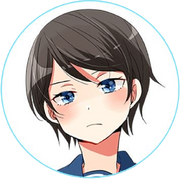 Mirei on the promotional poster of Sound! Euphonium: The Movie - Our Promise: A Brand New Day

Mirei on the new visual key of Sound! Euphonium: The Movie - Our Promise: A Brand New Day