Motomu Tsukinaga (月永 求, Tsukinaga Motomu) is a new first-year at Kitauji High School. He joins the band as a contrabass player in Kumiko's second year.

Tsukinaga is a teenage boy with fair skin, and aqua, teal eyes. He has short black hair with the front of his hair parted at the right.

He is stated as very crabby on the inside, despite looking adorable on the outside. He hates being called cute or by his surname. 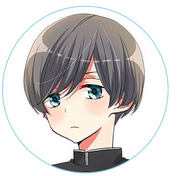 Motomu's light novel design
Add a photo to this gallery

Motomu on the new visual key of Sound! Euphonium the Movie: Oath's Finale

Motomu on the promotional poster of Sound! Euphonium the Movie: Oath's Finale

Retrieved from "https://hibike-euphonium.fandom.com/wiki/Motomu_Tsukinaga?oldid=25422"
Community content is available under CC-BY-SA unless otherwise noted.