The Oboe (オーボエ, Ōboe) is a double-reed instrument in the woodwind family. A musician who plays the oboe is called an "oboist" or simply an "oboe player."

The reed is key to making sound on the instrument. Most oboists learn to make their own reeds, as they must be replaced often, and are usually expensive and of substandard quality when store bought.

When the term oboe is used alone, it generally means the standard C oboe rather than other instruments of the family.

The English horn, or cor Anglais is a transposing instrument in the oboe family pitched in F, therefore a perfect fifth below the C oboe. It is a larger version of the oboe, and uses a bocal like a bassoon. It is a standard member in symphony orchestras, but rarely used in concert bands as most literature does not call for it. It is considered the alto voice of the oboe family.

The oboe d'amore is a transposing instrument in the oboe family pitched in A, therefore a minor third below the C oboe. It is occasionally called for in symphony orchestras, but it is not a standard member. It is considered the mezzo-soprano voice of the oboe family.

The baritone oboe or bass oboe is a transposing instrument in the oboe family pitched in C, notated one octave above the sounding pitch. It is an octave below the standard C oboe. It is exceptionally rare and almost never called for in any literature.

The lupophon is a version of the bass oboe which goes down to a low F. It is a fairly modern invention, and only manufactured by one company, meaning it is extremely rare. The instrument was made to handle the extremely low notes that Richard Strauss wrote in Eine Alpensinfonie, which would have been unplayable on the heckelphone at that time. It is essentially a modified heckelphone, and is often used in place of it.

The pitch of the regular oboe is affected by the way in which the reed is constructed, which has a significant effect on the sound of the instrument.

Orchestras normally tune to a concert A played by the oboe, since the pitch of the oboe is secure and its penetrating sound makes it ideal for tuning purposes. However, in most concert bands, the pitch is given by the principal B♭ clarinet, as the Kitauji High School Concert Band does.

The oboe is largely considered the most difficult woodwind instrument to play, especially since it is not easily transferable from other instruments as it uses a double reed. Since it plays such an important role in tuning the band, playing the oboe can be a big responsibility. The instrument is very difficult to master, and can take many years to get a good tone.

The instrument has a very distinct, yet versatile tone. Oboes can blend very well with the rest of the ensemble, or be heard above everyone else as a soloist.

Oboes are used primarily in symphony orchestras and concert bands. They are never used in marching bands for a variety of reasons. Oboists will normally become guard members or double on another instrument during marching season.

In symphony orchestras, the principal oboe is the de facto leader of the woodwind section. There is usually 2-3 oboes, and 1-2 English horns in the orchestra.

A concert band usually has one or two oboe players, although some bands may have up to three or even four. One or two of these players may double on English horn when necessary, although the Kitauji Concert Band does not perform any repertoire that requires an English horn.

In young school bands, teachers do not typically allow students to start directly on oboe lessons because of the instrument's difficulty. Most oboists in school bands begin on clarinet or flute in elementary or middle school before switching to oboe after a year or two on an easier instrument.

Mizore Yoroizuka is the only oboist in the Kitauji Concert Band and is shown to be an excellent player, as well as being able to make her own reeds.

In Sound! Euphonium: The Movie - Our Promise: A Brand New Day, another oboist, Ririka Kenzaki, joins the ensemble.

In Rikka High School Marching Band, there is an oboist named Mion Saijou. 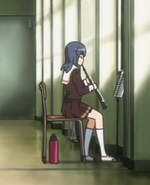 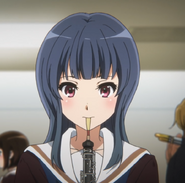 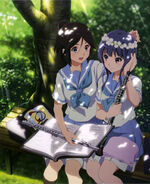 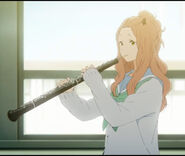 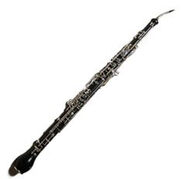 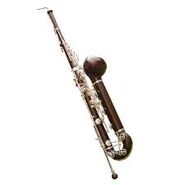