The Piccolo (ピッコロ, Pikkoro) is an instrument in the flute family, and by extension the woodwind family of musical instruments. It is half the size of a standard C flute. Someone who plays the piccolo is called a piccoloist.

The vast majority of piccolos are in C, but a tiny fraction are pitched in D♭. Manufactured in the early 20th century, these instruments are no longer produced, and are most famously used for John Philip Sousa's "Stars and Stripes Forever" piccolo solo.

The modern piccolo has most of the same fingerings and techniques as its larger sibling, the standard transverse flute, but being half-sized and therefore pitched up an octave, the instrument is much harder to play.

Because of the piccolo's incredibly high range, it is often playing an octave or more above every other member of the band (Except potentially the glockenspiel). This means piccolo players can be very easily picked out from even the largest of ensembles, and as such their parts must be perfected. To make matters more difficult for the piccoloist, the upper register of the instrument is much more bright and loud, making it even harder to blend.

Due to all the difficulties involved in playing the piccolo, someone who wants to play the piccolo will likely need at least a few year's experience and proficiency on the flute.

Despite being pitched in C, the piccolo is a transposing instrument. This is because the music for it will read exactly the same as a flute, but it will sound an octave higher.

The instrument is most commonly used in wind ensembles, symphony orchestras, or marching bands.

In orchestral settings, the piccolo player is often designated as "piccolo/flute III", or even "assistant principal". Most orchestras have designated this position as a solo position due to the demands of the literature. Piccolos are often orchestrated to double the violins or the flutes, adding sparkle and brilliance to the overall sound because of the aforementioned one-octave transposition upwards.

In concert band and marching bands, the piccolo will usually get its own part, though sometimes it is not available and thus doubles a flute part. In more advanced literature, piccolos often receive challenging solos. In a concert band, there is usually only 1 piccolo player, but marching bands may have several more.

Yoriko Souga is the only piccolo player in the Kitauji High School Concert Band, and she seems to be quite adept at it. She plays the piccolo in their Nationals performance, but also interchanges with playing the flute for other pieces.

In Sound! Euphonium: The Movie - Our Promise: A Brand New Day, Sari Takahashi switches from playing the flute to the piccolo.

Yoriko performing on the piccolo 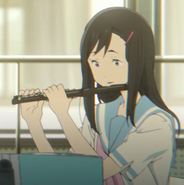