She is often seen wearing makeup and depicted in the standard Kitauji High School uniform for female third-year students. 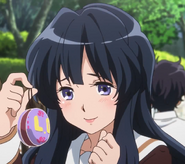