Episode 4
Raina Kitamura (喜多村 来南, Kitamura Raina) is a minor character in the Hibike! Euphonium series. She is a third-year student who plays the bassoon.

Raina is a very tall girl with wavy blonde hair that is tied into a ponytail laid on her shoulder and light green eyes.

She is usually seen with a normal Kitauji High School uniform for third-year students.

In Raina's appearances throughout the episodes, her face often has a serious or passive expression. However, she is shown with a bright smile while marching the parade. She seems to have a good relationship with Mikino Oka, who is also a bassoonist.

Raina is also shown to have great respect and leadership as shown through her graceful playing during her brief but notable solo in Crescent Moon Dance and her good representation of her section at section leader meetings. 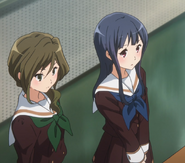