Satomi Niiyama (新山 聡美 Nīyama Satomi) is a woodwind instructor brought in by Noboru Taki to help with the Kitauji High School Concert Band on its path to the national concert band competition. Her main instrument is flute, which she majored in, but she is also highly proficient in all other woodwind instruments.

Nīyama is drawn in the manga with a long skirt, a short-sleeved shirt with a black collar, and short wavy blond hair. Between Noboru Taki and Masahiro Hashimoto, she is the shortest.

In the anime, Nīyama's outfit does not change very much, but her hair is longer, brown and curly.

Nīyama is the youngest of the four instructors directing the band who is described as gentle with a sweet personality and her woodwind students describe her as a firm but good teacher.

As nice as she is outside of class, Nīyama is revealed to be as strict as Noboru Taki and Masahiro Hashimoto during rehearsal and sectionals, setting extremely high standards for her students and forcing them to practice for hours every day.

Nīyama is introduced by Noboru Taki to the band, leading many of the members to believe she is Taki's girlfriend that this causes some distress on Reina Kousaka's part.

Nīyama apologizes to Mizore Yoroizuka for not holding her to standards as high as Masahiro Hashimoto's, just because Mizore was a high school student.

She encourages Mizore to "have some fun" with her solo.

Nīyama and Taki, along with Hashimoto, were good friends in college. Nīyama was a grade younger than Taki and Hashimoto, whom both saw her as a little sister of sorts. Though Nīyama is now married, she occasionally flirts with Taki just for fun, but without any serious intent. However, this leads most of the band to suspect her for a while of being Taki's girlfriend, until Hashimoto reveals that she is already married. 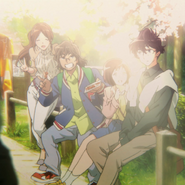 Satomi, Hashimoto, Taki's girlfriend (to be wife), and Taki