Satsuki is a teenage girl with a short stature, fair skin and emerald green eyes. She has short gold blonde hair which she wears in two side ponytails with straight bangs covering her forehead. She decorates her hair with two green pearls for each ponytail.

Satsuki's personality resembles Hazuki Katou and Sapphire Kawashima - she is mostly friendly and cheerful who is a sociable person where she can become friends instantly with anyone. 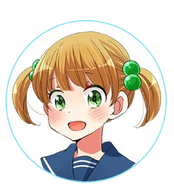 Satsuki on the promotional poster of Sound! Euphonium: The Movie - Our Promise: A Brand New Day

Satsuki on the new visual key of Sound! Euphonium: The Movie - Our Promise: A Brand New Day