Hibike! Euphonium Wiki
Register
Don't have an account?
Sign In
Advertisement
in: Anime, Movies, Our Promise: A Brand New Day

During the winter, Kumiko Oumae is taken aback when Shuuichi Tsukamoto asks her out. In the present day, Kumiko, now a second-year students, wonders about recruitment and later welcomes Kanade Hisaishi, a first-year euphonium player, into the concert band club. During the first club meeting, Noboru Taki states Kitauji's objective this year will be to make the National tournament, but club president Yuuko Yoshikawa reminds everyone that their goal isn't merely to make it, but to win. Kumiko and third-year Tomoe Kabe are assigned to look after the first years together. The concert band thus divides its members out to practise, and it becomes clear that work will be needed to reduce the emotional distance separating the first-years from the senior students: Mirei Suzuki is a taciturn tuba player who finds it difficult to connect with the others, while Motomu Tsukinaga is a double bass player who dislikes his family name. Kumiko quickly finds herself amidst the drama surrounding the first year students and does her best to resolve conflicts in her role. During Sunfes, Kumiko manages to convince Mirei to continue playing in the concert band despite the fact that the latter does not feel like she fits in, and Mirei soon reconciles with the others. However, Kanade grows angry, feeling Kumiko to have interfered in something that would have sorted itself out. During the summer festival, Kumiko goes on a date with Shuuichi, but after Shuuichi tries to kiss her, she angrily runs off and finds Reina Kousaka at the summit of Mt. Daichiki, which the two had previously ascended. They speak briefly about their futures here. The next day, Tomoe reveals that she intends to stand down from competition, but will continue in managing the concert band club from the sound . She privately explains to Kumiko that she developed Temporomandibular Joint Dysfunction and cannot play without experiencing pain, but is relieved. Later, Kanade seeks out Kumiko and asks her about how Reina came to be chosen for the solo trumpet role. Kumiko replies it was based purely on skill, but Kanade feels that had Kitauji not done as well, Reina would have shouldered the blame. When the auditions arrive, Kumiko and Natsuki Nakagawa notice that Kanade plans to throw the fight. They pull her from the auditions and ask the percussion continue. It is here that Kumiko learns from Kanade the truth – in middle school, Kanade had been selected to play in place of a more senior student, but they only placed silver, leading the others to wonder if they were better off with a senior student. She manages to convince Kanade to give it her all regardless, and when the audition's results arrive, it turns out Kumiko, Kanade and Natsuki have made the cut. The concert band begins preparing for the competition, attending another summer camp, and Kumiko decides to break things off with Shuuichi until her future becomes more certain. On the day of competition, Kitauji delivers a compelling performance of the suite from Liz and the Blue Bird, moving the audience (including Asuka and Kaori, who have returned to watch) but do not qualify for the nationals. In the aftermath, Yuuko compliments the group for having given their strongest performance yet, but Kanade is devastated. Some time later, Kumiko becomes the president of Kitauji's concert band club.

On MyAnimeList, users gave Sound! Euphonium: The Movie - Our Promise: A Brand New Day a weighted score of 7.76 out of 10.[7] 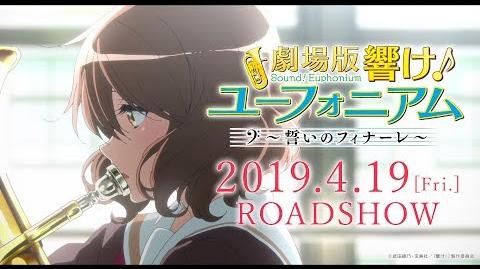