Vivace!
Station Concert (えきびるコンサート, Ekibiru Konsāto) is the seventh episode of the second season of the Hibike! Euphonium anime series. It was broadcasted on November 16, 2016.

Taki arranges for the band to play at a concert at the train station. However, one day Asuka's abusive mother arrives at school and tries to force her to quit to focus on exams; Kumiko witnesses the altercation at the teachers' office and sees Asuka's mother hit her. Rumors spread that Asuka is going to quit, worrying the entire club, and though Asuka plays it off as not a big deal, she is able to attend less often. Haruka and Kaori find Asuka's sheet music and realize how much she wants to go to nationals, and Haruka speaks to the band members about the way everyone has relied too much on Asuka and put her on a pedestal. Asuka arrives in time to play at the station concert, where Haruka has a solo. 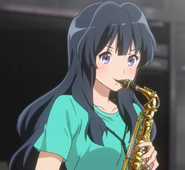