日本語 Kenjiro Tsuda
Takuya Gotou (後藤 卓也, Gotō Takuya) is a supporting character in the Sound! Euphonium series. He is a second-year student who plays the tuba in the Kitauji High School Concert Band.

Takuya is a young man who is very tall for his age. He has short, spiked, messy dark brown hair, and brown eyes framed by thick, black glasses.

Takuya is a teenage boy who is quiet most of the time, but at the same time he can be quite frank in which he can offend others, however, he doesn't really mean it, as he just accidentally says the things that are in his mind. Also, despite his rough appearance, Takuya is a very friendly and passionate young man, and gives good advice to those younger to him and he likes his tuba. He also says that love and confidence are important.

He first appears introducing himself just as Gotou, and telling the students that he is a tubist, and then says that the tuba doesn't get so many melody parts.

Gotou later becomes the leader of the bass section in Oath's Finale.

Gotou and Riko were friends who played the same instrument. They later began dating, as they had found an interest in each other. They have a close relationship and are constantly supporting and encouraging each other. 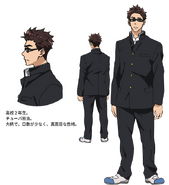 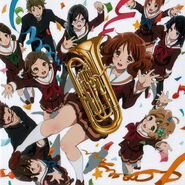