In B♭: sounds an octave and a full step lower than written.
Sounding

The tenor sax is about 1.5x as large as an alto saxophone. It, like all other saxophones, consists of a conical tube which is narrowest at the top and gradually increases its bore until it flares out to form the bell. The tenor sax's distinct feature is its neck, which features a bend to reduce the practical length of the instrument. This helps distinguish it from altos when a scale of reference is unavailable.

Like other woodwinds, the tenor saxophone uses a mouthpiece and reed, joined by a ligature made of either metal or fabric. More modern ligatures could also be made from rubber. The size of the reed is relative to the size of the instrument, and thus its reed is both larger than the alto's and smaller than the bari's. Tenor saxes also make use of a neck strap to help support the instrument's weight and position it correctly.

The C Melody Sax, C Tenor Sax or simply Melody Sax is an uncommon variant of the tenor saxophone, pitched in C. Its initial purpose was to provide an orchestral instrument in the saxophone family, as per Adolphe Sax's original view for the instrument (Having two distinct sides of the family; one in B♭ and E♭ for military bands, and one in C and F for orchestral use). Of course, as proven by time, the latter family was not exactly a success and did not make it past the first half of the 20th century. Some still exist, but they are not nearly as popular.

The instrument is slightly smaller than the B♭ tenor sax but larger than the alto sax. Additionally, it is non-transposing, giving it an advantage over other members of the family.

The tenor saxophone is considered to be fairly easy to pick up, but it takes a long time to get especially good at, particularly tone wise. Like all saxophones, the fingerings are universal, so a saxophonist who plays another type of sax can easily pick up a tenor.

Tenor saxes are known for their ability to blend very well, and also stand out easily as a solo instrument. Many players tend to stick closer to one end of the spectrum based on the type of music they like to perform.

The tenor is one of the two most common types of saxophones, the other being the alto. As such, they are often the first type of saxophone a new saxophonist will learn, and pieces written for smaller or beginner ensembles will usually include a part for tenor sax.

The tenor is pitched in the key of B♭, and written as a transposing instrument in the treble clef, sounding an octave and a major second lower than the written pitch. It is also one octave lower than the soprano saxophone.

There are three students who play tenor saxophone in Kitauji High School Concert Band, including: 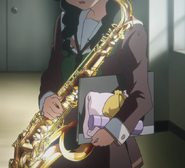