Tomoe Kabe (加部 友恵, Kabe Tomoe) is a minor character in the Hibike! Euphonium series. She is a second-year student who plays the trumpet.

She has straight, shoulder-length, brown hair. She uses two heart-shaped hairpins to tie her hair into two tiny ponytails and has cherry-red eyes.

Tomoe is a very helpful and hard-working person as seen when she takes the leader role of Team Monaka. She is also a friend of Yuuko Yoshikawa and they sometimes hang out together when Yuuko is not with Kaori, Natsuki or Mizore.

Tomoe is tasked alongside Kumiko Oumae to instruct and manage the first-year members of the band. During the time leading up to auditions, Tomoe began to notice pain in her jaw when she played. Eventually, it started becoming difficult to play high notes, so she visited a doctor who diagnosed her with arthritis. She consulted Noboru Taki, who suggested she could play a different instrument, however, Tomoe decided it was too close to auditions to try learning a new instrument. She later announced to the band that she would be stepping down from participation in the auditions, and instead would support them as concert band manager.

Tomoe and Yuuko at the festival

Tomoe with Natsuki and Yuuko

Tomoe plays rock -paper -scissors with Hazuki for the pudding.

Tomoe with Sayaka Fukui and the rest of Team Monaka. 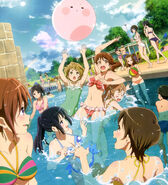 
Retrieved from "https://hibike-euphonium.fandom.com/wiki/Tomoe_Kabe?oldid=24620"
Community content is available under CC-BY-SA unless otherwise noted.