Trombonists
The Trombone (トロンボーン, Toronbōn) is a musical instrument in the brass family. A musician who plays the trombone is called a trombonist or simply a trombone player.

It has a very distinct shape, featuring a long, primarily cylindrical tube made of brass which is narrowest at the mouthpiece's end and widest at the bell. Its most defining characteristic is its slide, which can be used to adjust the length of the tubing and thus the pitch of the instrument.

The term trombone generally refers to the standard B♭ tenor trombone, rather than the whole family or any of its other members.

The bass trombone is a common variant of the regular tenor trombone. It is pitched in B♭, and has a wider bore, giving it a boost in the lower register. Additionally, it has two triggers which alter the key of the instrument, the first changing it to F, and the second either E, G♭, or D depending on which system is in place on the instrument.

The alto trombone is a once common instrument pitched in E♭ or F, a fourth or fifth higher than the tenor trombone. It is one of two instruments to read regularly in alto clef, the other being viola. Recently, the alto trombone has risen in popularity as new repertoire is being written and discovered.

The contrabass trombone is an uncommon member of the trombone family. It is usually pitched in either B♭ of F. It is sometimes seen in orchestral literature.

The cimbasso (pronounced chim-BAH-so) is a type of contrabass trombone. It features 3-6 rotary or piston valves, and is usually pitched in F like the contrabass trombone, though C, E♭ and B♭ models exist too. It has the same range as a tuba, and is considered a hybrid between it and the trombone. It is most often found in opera pieces.

The valve trombone contains a wide variety of ranges, from alto to contrabass, but the most common is the tenor valve trombone. They are played identically to trumpets, but an octave lower.

Trombones have one of the widest dynamic ranges, from incredibly quiet to outrageously loud, actually being the loudest wind instrument aside from pipe organs. It can also use a mute similar to trumpets, however, it doesn't affect the sound in quite the same way. 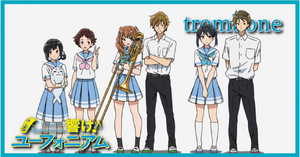 There are six students that play trombone in Kitauji High School Concert Band, which are:

In Rikka High School Marching Band, there are 5 known trombonists:

Noboru Taki also played trombone from elementary school through college, where he majored in music education with a concentration in trombone performance. Mamiko Oumae also played the trombone until she had to quit to focus on academics. 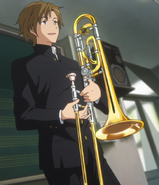 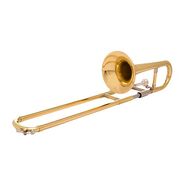 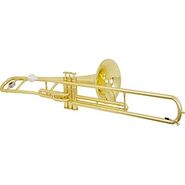