Vivace!
Troubled Nocturnes (なやめるノクターン, Nayameru Nokutān) is the third episode of the second season of the Hibike! Euphonium anime series. It was broadcasted on October 20, 2016.

The band settles into a Spartan rehearsal schedule as the camp continues. Taki approves Kumiko to play the part she had trouble with in the previous season in concert with Asuka, but Mizore's oboe solo is criticized by Hashimoto, who encourages her to show more emotion. Kumiko approaches Asuka about Nozomi, and Asuka explains that she is refusing Nozomi because of Mizore, who as the only oboeist is crucial to the band's chances at the next competition. The band gets together that night to play with fireworks, and Kumiko learns from Hashimoto that Taki used to be married and is still grieving the loss of his wife. Later on, Kumiko meets and reconciles with Yuuko over their concerns for Mizore and complicated feelings on competitions. 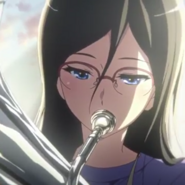