Tsubame is a teenage girl with short, green hair that has spiky ends, indigo-blue eyes and she wears round-framed glasses similar to Asuka Tanaka's glasses but without the red frame.

In the light novel, she is described as having short, spiky black hair and black eyes, with rimless glasses.

Tsubame is a fairly reserved and somewhat socially awkward girl, which is demonstrated when Hazuki Katou introduces her to Kumiko Oumae and Sapphire Kawashima on their first day of class, and she struggles to figure out what name to call them by.

Tsubame seems to be good friends with most of Team Monaka and other members of the percussion section. 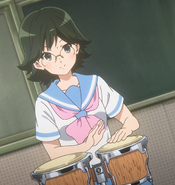 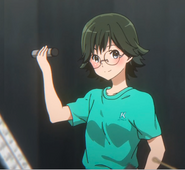