Tsune Watanabe (渡辺 つね, Watanabe Tsune) is a third-year student at Kitauji High School in the main series, a member of the concert band who plays the flute, and the band's alumni coordinator.

Tsune is a teenage girl with an average build. She has wavy chest-length light-brown hair, that has a braid on her right where it is tied across her head by two pink heart pins; burgundy-colored eyes and very thin eyebrows.

She is usually seen with a normal Kitauji High School uniform for female third-year students.

Not much is known about Tsune's personality. 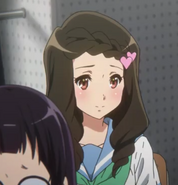