The Tuba (チューバ, Chūba) is the largest and lowest-pitched musical instrument in the brass family. A person who plays the tuba is known as a tubaist or tubist.

The tuba comes in two forms of valves:

The sousaphone is an instrument similar to a tuba designed to make holding it easier. It is most commonly used in marching bands. It wraps around the player's waist, making it easier to carry while marching. It typically has three piston valves, but there are also models with four valves to increase range.

The contrabass bugle, much like the sousaphone, is also an instrument similar to a tuba designed to make playing and holding it easier. It replaces the sousaphone in drum & bugle corps, along with some marching bands. It rests on the shoulder of the player while being played and is held in front or by the side when at horns down position. And also like the sousaphone, it usually has three piston valves, sometimes four.

The predecessor of the tuba, the ophicleide is actually a kind of keyed bugle, the lowest pitched instrument of its kind. The instrument is only related to the tuba in terms of register and the mouthpiece- the instruments actually uses a sort of woodwind style keywork with keys and pads. Today, it is not used anymore, unless the orchestra wants to be authentic with their instruments in pieces such as Hector Berlioz's Symphonie Fantastique.

Like all other brass instruments, sound is produced by vibrating or "buzzing" the lips into a large cupped mouthpiece.

There are three students that play tuba in Kitauji High School Concert Band: 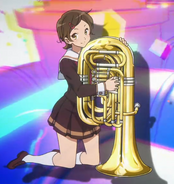 Hazuki and her tuba

Hazuki and Riko holding the Tuba 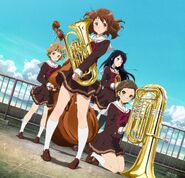 A disassembled tuba ready to be cleaned 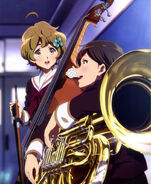 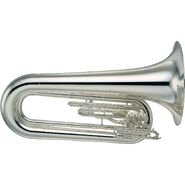