Percussionists
The Vibraphone (ビブラフォン, Biburafon), colloquially known as vibes is a musical instrument in the percussion family. A musician who plays the vibraphone is called a vibraphonist or simply a vibraphone player.

The instrument consists of a set of aluminum bars arranged like a piano. The bars are arched underneath to lower the pitch and thus make the lower notes more manageably sized. The bars are suspended by a cord that runs through the width of the bars through a hole drilled through the node of the bar (the least resonant part of the bar). Beneath each bar is a resonator, a thin-walled tube that helps amplify the instrument's sound. The length of the tube is determined by the size of the bar, and both must be perfectly in tune with each other.

Vibraphones are the most mechanically complex mallet percussion instrument. They have a pedal that can be used to dampen the sound (shorten the length of the notes) if it is left untouched, or allow the notes to be sustained if it is pressed down. This is not unlike the piano's pedal. The instrument also has a motor that can be turned on and off to rotate the disks inside the resonators. The speed can also be adjusted, and when turned on, it produces a vibrato effect.

Typically built with 3 octaves, in the past decade, a surge of new 4-octave vibraphones has arisen. This has increased the versatility of the instrument greatly.

Due to the unique construction of the instrument, it allows composers creativity in the sustain effect. Players need good coordination in both their hands and feet if there is extensive use of the pedal. Since all the notes struck remain sustained, it can often result in a very dissonant sound by the end of the passage. In order to mitigate this, vibraphonists may use a technique known as "mallet dampening", in which they gently rub one of their mallets against the last played note as they strike the next. This eliminates the need for the rather jarring stop produced by lifting the pedal.

Vibraphone parts often call for unconventional ways to produce sound. One of the more popular is by scraping an orchestral bow (usually cello) along the edge of the bars.

In Kitauji High School Concert Band, Sousuke Maeda plays a vibraphone in movements 3 and 4 of Liz and the Blue Bird piece. 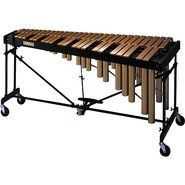 A 4-octave vibraphone.
Community content is available under CC-BY-SA unless otherwise noted.
Advertisement