She is normally seen in the standard Kitauji female third-year uniform.

Yumina seems to be a very playful and carefree girl. At the beginning of the series, she was often depicted goofing around with friends at sectionals.

Yumina is very close friends with Junko Koshigawa, as they are often depicted hanging out or talking together. 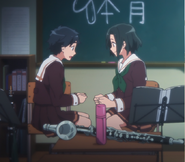 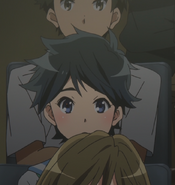